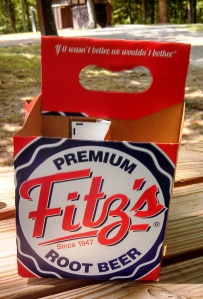 Fitz’s is a small soda company in St. Louis Missouri. In addition to their bottling company they have one restaurant. They serve a variety of burgers, salads and sandwiches at their restaurant. They sell four packs of soda that you can mix and match or get four of one kind these four packs are $4 each or two for $7,

Their most popular soda is their root beer which to me tastes like a mix of A&W root beer and Maine Root root beer. Their root beer is creamy but also has a sharpness which I think tastes great. They have many flavors of soda including, Root Beer, Cream Soda, and Ginger Beer all of which are made with natural cane sugar instead of corn syrup.

When I was at the restaurant I had a veggie burger and a root beer float. The veggie burger was very well done and tasted similar to a hamburger. It said in the description that it was made to taste like a hamburger because of that I think that the veggie burger is targeted to people who are vegetarians for moral reasons rather than for taste reasons. With the kids meal they have special fries which are shaped like a smiley face. The regular fries taste much better than the smiley face fries.