Having been on the road for a couple of weeks now, I have new-found respect for all the full-time RVers who post regularly on their blog. We’re still struggling to find a rhythm and balance between being tourists and having some semblance of regular life. And then there’s the challenge of wi-fi. We’re taking the approach of being grateful when a camping spot has it, and otherwise, adapting when we can. So, not so much regular posts so far…

We spent three days camping at the Casino Queen Casino RV park in east St. Louis. I’d originally made reservations at a different urban campground in downtown St. Louis, but this ended up being a better option for us. Just a parking lot with 1 tree per site, but they put us right across from the playground. It’s small and not much, but gave Theo a place to burn off steam and there was enough green space for a game of catch. The wi-fi is really only strong near the laundromat and bathrooms, but it worked out fine for me to sit and do laundry and work on my summer class I was finishing up.

It’s affordable, and the location is what made it. The boys and I rode our bikes, across the Mississippi!!, on the Eads bridge several times. And Lyman was able to catch the Metro at the convenient stop right at the front of the casino parking lot the night he went to see the Cardinals.

We spent one day in Hannibal, one day going to see the Arch and wandering around downtown a bit, and one day devoted to City Museum and the City Garden by day, and Forest Park during the evening while Lyman went to the ball game. I had no idea it is such a great city to come for a family vacation. I really feel like we could have stayed for a few weeks, and know that in our few days we only scratched the surface. I can’t recommend the City Museum and the downtown City Garden outdoor sculpture museum enough. It’s hard to capture either place in words, so a slew of pictures will have to suffice. 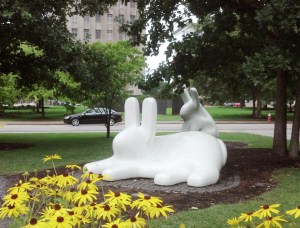 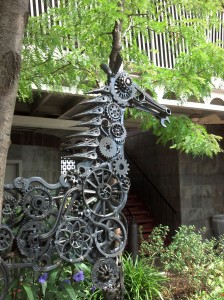